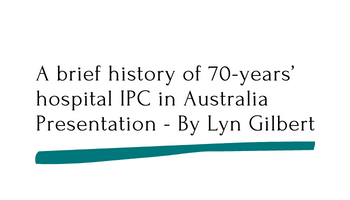 Modern hospital infection prevention and control (IPC) in Australia, had its roots in the 1940s/50s, when outbreaks of hospital-acquired ‘Staphylococcus pyogenes’ surgical and neonatal infections were first described and investigated. In the 1960s, increasing surgical site infection (SSI) rates and antibiotic resistance prompted bacteriologists and surgeons, collaboratively, to appoint the first ‘infection control nurses’ (ICNs), in Brisbane, 1962 and Sydney, 1965 (when MRSA was first identified) and, gradually, in other states and more hospitals.

ICNs’ main task, initially, was SSI surveillance, which they combined with daily ward visits and on-the-spot staff coaching, but they rapidly became involved and influential in all aspects of hospital practice – cleaning, sterilisation, ventilation, and aseptic technique – often with technical and moral support from hospital microbiologists. However, in the 1970s, when ICNs were required for hospital accreditation, many were appointed without role definition or training. Local support and education groups formed; they amalgamated, in 1985, into AICA, and ACIPC in 2011. Opportunities for training, ICP appointments and recognition of IPC as a critical subspeciality increased, gradually but haphazardly.

Will the aftermath of COVID-19 be different? How can we consolidate the lessons, maintain IPC awareness and embed best practice and resilience into the future?

Professor Lyn Gilbert presented on the history of IPC in Australia for the ACIPC International Conference. You can watch the presentation in full here – https://vimeo.com/681113928/e1d14f7498